Let’s imagine you were the son of the greatest artist, what would you do with the priceless property after your relative’s sudden death? These could include artworks, real estate, cash, and millions of responsibilities for you to manage, but how would you manage your asset properly?

Such was not the story in Thailand in the past because the price of Thai artworks was not high enough to pay for a living. The heirs kept some works for their memory. For the rest, they would sell some to get cash if they get bored. If their parents were unknown in the market, the heirs then felt free to do anything with the inherited artworks.

Over the course of time, Thai artists have become well off as they can sell their works at a dear price. If they were popular among people, sometimes, their followers would take selfies with them as if they are K-pop superstars. This would be troublesome to the heirs after their parent’s death as their fan clubs wouldn’t let their beloved artists die from them. They honour the artworks like what they do with the popular amulets. They will try monitoring what the heirs will do with the artworks. If the artworks were well preserved or promoted properly, the heirs would be praise, otherwise, they would be criticized.

Property management after death can be problematic for some families. Let’s take a look at some successful cases from well-known artist’s families in the past.

To start with Pablo Picasso’s case, he passed away when he was 91 in 1973. Unfortunately, he didn’t have a will to manage his considerable property after his death. His property included paintings (1,885 pieces), drawings (7,089 pieces), printmaking works (30,000 pieces), sculptures (1,228 pieces), potteries (3,222 pieces), sketchbooks (150 books), among other assets. Moreover, he left five mansions, cash, bonds, stock shares, gold, and etc. for his extended families. Some said his property value could worth about THB ten billion at that time.

During that time, four legitimate heirs born from three of Pablo’s wives inherited the priceless property of their father. Like a typical millionaires’ families, Pablo’s tremendous fortune bestowed on his families brought up quarrelsome matters. They spent six years in court to argue for a fair share for themselves by hiring almost 50 lawyers, accountants, and art specialists and wasted about a billion THB.

In the end, the French court finalized its decision that Claude would be the legal property manager and manage his father’s possessions. This would be far better than leaving the huge property for each one to manage by himself separately. Otherwise, the mismanagement could cause great loss and devaluation in Pablo’s artworks.

Prior to the assignment from the court, the French government made a quick decision to charge for the inheritance tax from Pablo’s families, so the heirs decided to pay tax in the form of

paintings which could reach about 3,000 pieces in number. Those works have been exhibited in Picasso’s museum in Paris.

They also set up a trust fund that aimed to manage the inherited property. Its estate looked like an ordinary office in Paris under management by less than a dozen officers. The income was generated by trading Picasso’s works and the fee from the artwork transaction each time through the auction house and the gallery. According to the law in the western world, artists are eligible to receive a proportion of fee arising from each trading of their artworks. No matter the times of trading. Moreover, this benefit has covered 70 years after his death, so the heirs acquire this profit conjured up upon this wonderful period. How lucky are they? They earn a passive income without working. Each year, the amount of income would be about 300 million THB.

Besides the income mentioned above, this trust fund has gained another income from the sales of the patent under the name of ‘Picasso’ which are labelled on porcelains, pillows, duvets, carpets, and underwear. One of the most memorable goods was a model of Citroën car which made up an earning well over 700 million THB. Like the other brand names, the name ‘Picasso’ was used on pirate objects too: shoes, clothing, toothpaste, pizza, ice-cream, or fishing rods. This resulted in the heir reporting these unwanted cases to the court. Another example of a pirate crime of using ‘Picasso’s painting’ without admission was the film named ‘Titanic’. In the scene of the ship sinking, the painting descended with the ship. It was an unacceptable case for the heirs and of course, they did submit this case to the court, too.

It would be the pleasure of the dead if his heirs abandoned their conflicts and not chased benefits for themselves rapaciously. Instead, they have contributed to Picasso’s fame by bequeathing some of his artworks to museums, and some of the works have been auctioned for raising capital for charities. Picasso’s studio in Paris has been adapted to be a knowledge centre for the public.

When Picasso’s name became more popular than it was in the past, the patent began selling well at a better price. The painting price leapfrogged from well over 100,000 THB. The capital size of the trust fund has been extended from ten billion THB to priceless. Looking back at my favourite ‘Picasso’ pen in hand and how smoothly wrote. However, I often wonder if it’s a real patent or a counterfeit as I got it from Shenzhen City in China.

Another interesting case of good property management after death is Vincent van Gogh’s fund. Both Pablo Picasso and Vincent van Gogh are legendary artists although there is something different. During his lifetime, Van Gogh had lived in misery. He couldn’t make money from his artworks, so he was impaired by depression and a mental disorder. This resulted in his having his ear cut and committing suicide. Theo, his brother, was so generous enough that he gave financial support to Van Gogh throughout his life. As Van Gogh didn’t have any son,  Theo inherited all of his brother’s artworks. To Theo’s great grief, he had been sick for a few months and died leaving piles of the artworks to his wife, Ms. Johanna Bunger and a young son,Willem.

This resulted in a huge pile-up of a massive number of Van Gogh’s paintings in her house. her relatives advised her to burn all of them but Joanna ignored the advice and kept all of the paintings.

Vincent van Gogh and Theo were very close. Both had exchanged letters for a long period of time. Those letters depicted the hardship of Van Gogh’s living which was much more tragic than the series on television. All of the letters were also handed on to Joanna who exhibited Van Gogh’s artworks together with the stories in the letters. With his unique style of painting along with his rasping biography, the public turned their attention to his works and this made Van Gogh’s name to be widespread around the world.

For more than 30 years, Joanna put some of the painting on commercial trading to earn her living. After her death in 1925, Willem, Joanna’s only son, covering every facet of his house with Van Gogh’s paintings. Some of the paintings were loaned by the museums. When he got older, he discussed this issue with his family. If he generated the paintings for his heirs, everyone had to pay a heavy inheritance tax by selling some of the paintings. This wouldn’t sound good for the beloved bequest which was well preserved by the grandparents.

Therefore, Willem and his heirs set up ‘Vincent van Gogh’s Foundation’ in 1962 and donated all Van Gogh’s paintings and belongings to the foundation. They kept nothing for themselves.

After acknowledging their generosity of Van Gogh’s family, Nederland’s government has managed some piece of land to establish a new museum in the middle of Amsterdam, the capital city, to return their gratitude. This museum has been used as a centre to compile and exhibit Van Gogh’s artworks according to the heirs’ intentions. During the passage of time, Van Gogh’s museum has attracted well over two million visitors around the world annually. This boosts the tourism business and generates income for the country substantially.

Although Van Gogh’s family weren’t wealthy people, their generosity was legendary and far more formidable than anyone else. Frankly speaking, my jealousy was stirred up as they had a chance to act big and contribute to society. No matter who they are. They choose to commit to a good deed like the popular singer named ‘Toon Bodyslam’ who raised funds for several poor hospitals by running around Thailand, or Sergeant Sam who died from rescuing 13 kids from Tham Luang Cave in Chiangrai. Alternatively, they could be just ordinary millionaires or normal people who lived on earth and died without commemoration. Let’s think about it. 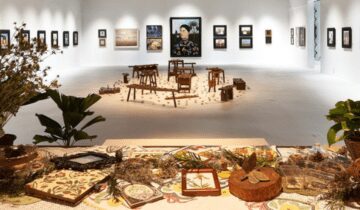 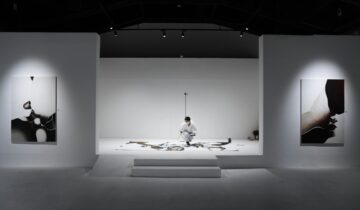 Shapes on the Brink by Hiroko Hongyok 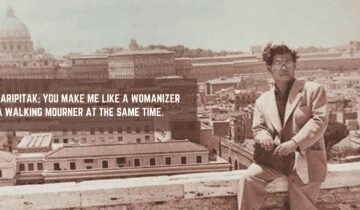 Fua Haripitak; You make me like a womanizer and a walking mourner at the same time.

we are moving to