Dating back to my youth, I often accompanied my parents to temples (with waddling steps and half-sleeping moods) a conventional Thai practice. At the time, going to the temple was not enjoyable. Every temple had something in common, such as the ordination halls, monks, monks’ cubicles, and dogs. I started going to the temple purposefully when I grew up. It’s not that I was excited about Dhamma, meditating, preaching, or praying. Frankly speaking, I like to wander around the temple because I like to explore the architectural styles, particularly the wall paintings. According to my love for contemporary art, one of my favourite paintings is of the legendary master Krua.

He was born in the reign of King Rama the 3rd around hundreds of years ago. There was no specific date of his birth nor information about his family. We just know that he was a local of Bangchan Sub-district, Phetchaburi Province.  He was ordained to monkhood when he was young at Ratburana Temple (Wat Lieb) where he lived and worked till his death.

During his early monkhood, he had a Buddhist name “In”. When he became an adult monk, he was additionally named ‘In Khong’ (‘Khong’ means ‘Great’ or ‘Big’). For example, we call a big freshwater clam ‘Hoi Khong’ (Hoi means a clam). As ‘In Khong’ had remained in his monkhood since he was young, the title ‘Khrua’ was eventually added. ‘Khrua’ is named after an elderly abbot who has solely behaved himself.

Entering to the monkhood during his youth enabled him to hone his artistic skill because the temple was the center of fine arts in the old time. Nobody liked to have their house’s walls painted nor to have some sculptures decorated in the garden. When people felt like seeing some paintings or any kinds of artwork, they had to visit the temple where artists heavily devoted themselves to create their finest works to religion. For example, a sculptor tried to shape up the Buddhism image as best as possible, so everyone, who came to worship, could feel faithfully embraced. In addition to this, the painter put  great effort into the  painting of Lord of Buddha’s story and moral lessons which are easy to understand for people especially for those who are illiterate. Hence, the temple could be considered as the stage for the artists. This can be another way to preserve Buddhism too.

Before this, Khrua In Khong was totally inspired by former Thai artists, so his first paintings looked typical as can be seen in ordinary temples. The outline of the picture was emphasized and the picture was depicted in a two-dimensional aspect. The ratio of the figures was not naturally shaped or measured. Some said that Khrua In Khong devoted himself to the painting and didn’t like anyone to hang around. This would cause him to lose his concentration on painting design. Therefore, he always locked his cubicle from outside to confuse everyone that he was away. In fact, he climbed out of his place through the window.

Fortunately his painting impressed King Rama IV, King Mongkut, while the king was in the monkhood during his crown prince holding. The king granted several chances to Khrua In Khong to paint the walls of the temples during his reign, such as Pra-Ngam Temple in Ayutthaya province, Wat Maha Samanaram in Phetchaburi province, and Temple of the Emerald Buddha in Bangkok.

As the king had been ordained for 27 years, he studied a lot of Buddhism lessons until he became knowledgeable. He, then, took this chance to develop the Buddhism system in Thailand. For example, he changed the perception of the lord of Buddha who possessed magical properties to the real human being who possesses wisdom, insight, and mercy to enlighten people to do good-deeds. These moral lessons were also improved from an untouchable holy book to an up-to-date lesson. Since the lessons were verbally scribed, they could cause some misunderstanding.  In terms of the monks, he felt that most of them failed to behave properly. Some became monks because they wanted to live comfortably or to exempt their military service. They believed that being a monk didn’t need hard work and involved  doing a simple routine like eating and sleeping. That’s why the regulations for the monk needed to be seriously evolved. Through this Buddhism development, the new doctrine called “Dhammayuttika Nikaya” was introduced. This meant that everything could be finalized in Dhamma which is the heart of Buddhism.

During Khrua In Khong’s lifetime,  was the time of the inflow of foreigners from Europe and  the USA to the Kingdom of Siam. This was the western colonization’s time. Consequently, Siam had to open the kingdom and develop the city substantially like the western’s. The westerns couldn’t claim that Siam was underdeveloped resulting in their duty to colonize Siam.

As a result, westerners were everywhere including missionaries, foreign public servants, doctors, merchants who started their businesses like imported shops, publishers, photoshops, and more.  There were different types of foreign ships along the Chao Phraya River, such as

ships, sailboats, and steamers. Everywhere in the city looked civilized, such as well-paved roads, or plenty of cement buildings in western style like mushrooms sprawling in the jungle. This eradicated the ancient belief that the people’s house must be built from wood only because the cement buildings resembled the temples or the palaces. This can be implied that the house owners raised their status to a similar level of the royal family or the king. This would be unfortunate to the owners.

The combination of Dhammayuttika Nikaya and the western influence  dominated the change in Khrua In Khong’s artistic technique in his later life. In this era, his art style looked amazing as can be seen from the paintings on the walls of Wat BowonNiwet Wihan and Wat Borom Niwat. Those paintings are easy to understand as the contents are not focused on the reincarnation and the lives of the Lord of Buddha, but they emphasize Dhamma lessons according to Dhammayuttika Nikaya which centralizes itself on the moral lessons. To depict a concrete painting from the abstract lesson is pretty difficult to do, but Khrua In Khong designed the story and paintings wisely in the form of a Dhamma quest. Moreover, he added some skillful tricks that were never used by the other artists at that time. He painted the picture in a three-dimensional style which illustrated the distance between the objects from the foreground and the background. He didn’t outline the shape of the figure or object sharply, but he used light and shadow techniques. The figures in his paintings showed a proper ratio of body shape and size. Furthermore, with his vivid imagination, he put the story in the western settings although he had never been abroad.

This might be the result of his perception. During King Rama IV time, there was an influx of western people and culture that might inspire Khrua In Khong to depict the picture with the western settings and characters. It is believed that he worked closely with the king, so he had a great chance to see copious foreign objects: printed pictures and photographs which broadened his mind of the  outer world.

He applied the dim shades of green and blue on his paintings in Wat Bowon Niwet Wihan and Wat Boromniwat  to create the feeling of dreaming. This depicts that the painter had never been to the actual settings before. His paintings were based on his imagination. The dim shades can give the feeling of coldness in the foreign countries. Amid the freezing atmosphere, the picture of big cement or brick buildings with arch doors, roof domes, and balconies presented the western architecture where blonde and red-haired people walked around. Men dressed like doctors, sailors, or just ordinary people, while women wore colorful random skirts which were blue, pink, and white. Their outstanding fancy attires appeared scattered in the picture. They were in various actions: loitering along the road, relaxing in the park, riding a horse, riding on a carriage, rowing a boat, digging the ground, giving something or gathering around something strange such as a gigantic lotus, that was as big as a house, in a big pond. On the other hand, for the rest of the people, the painter just added some pointing actions like pointing to the sky or anywhere randomly. Some people turned their faces to the others. This city was surrounded with the sea of foamy crushing waves. In the sea was a steamer, a sailboat, and fierce enormous sea creatures and whales.

Since there are a lot of details in the pictures, not only do the audiences enjoy the paintings, but they also have a chance to learn moral lessons which is quite doubtful to decipher the underlying message. Thus, every scene of the painting lays the explanation underneath. For example, the description of the crushing wave scene with the sailboat heading to the land signifies that the lord of Buddha acts as a captain of the boat, and Drammayuttika Nikaya is compared with the boat. The people arriving at the shore safely symbolize the qualified monks achieving the heart of Dhamma lessons. Oh! That’s it.

Khrau In Khong had a traditional art background and didn’t learn about western art theory, so the proportion of the objects and figures in his paintings might look a bit distorted including the size and dimensional aspects. The shadow and light make the painting look surrealistic. There are some black-outlined pictures in some spots like traditional Thai paintings. The art supplies he used were traditional pigments and brushes. His styles and materials don’t devalue the paintings at all but intensify the sense and charm of the paintings. This results in the blending of Thai and western arts without any overlap. As well as this, he brought about newness in Thai art at that time as he crossed the boundaries of Thai traditional art and it’s conventions. Therefore, his artwork can be considered as the dawn of Thai modern art. 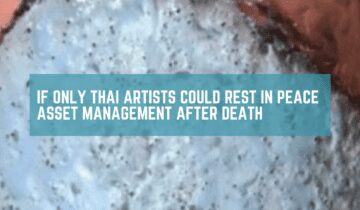 If only Thai Artists could Rest in Peace: Asset Management After Death 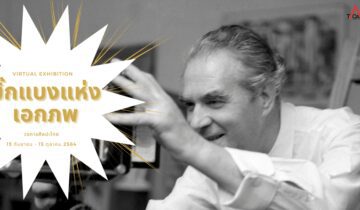 Silpa Bhirasri: The Big Bang of the Thai Art Sphere 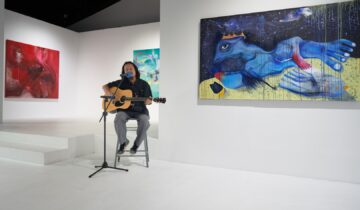 Sky a man land and sea

we are moving to